No sooner had I decided that 2015 would be my year of miracles than I was overwhelmed with miraculous happenings and manifestations all around me.

Even as I was collecting together this week’s miracles last night to share with you today, I received an email I wasn’t supposed to see since I don’t do emails after 6 p.m. anymore you know. But somehow, accidentally, I had Outlook open.

The first recording session for our podcast in 2015 was on New Year’s Eve and I told Nicola that my word of the week was miracles. I told her it was also my word of the year.

Although polite, I could tell Nicola wasn’t particularly impressed with my choice of word, she doesn’t do anything like as much woo woo as I do. But… guess what?

She only turned up to this week’s recording with a miracle of her own to share. Listen out for episode 9 when it goes live on 16th January to hear her tell the story about the miracle contained in the very first email of her new year.

My clients have reported a goodly handful of miracles; in fact, reports of miracles of assorted sizes have been pouring in all week.

R told us on Monday she’d been published in a magazine over Christmas and one of her intentions for this year was to be asked to speak by the same organisation. Lo and behold, no sooner had the words left her fingertips than an invitation flooded in; cosmically ordered on Monday, delivered on Tuesday, it took even R by surprise with the speediness of that one. I love a lo and behold moment, me.

A has been talking to me on and off for about a year about her admiration for her fellow countrywoman who is an exemplar of the laptop lifestyle and a role model for my client’s emerging business. They only had coffee together yesterday! Hooked up online Wednesday, brunching together Thursday. Life! A emailed me the story, saying “So I emailed her and asked if she’d like to catch up for coffee. She just said Yes!” Miracles are just that easy and fast and close at hand.

This is the little gem that popped into my inbox last night: “I’ve just realised that today I’ve had a four figure day, how about that?! Quite chuffed :)” – Quite rightly, I would be too, and this from a woman who only gave up her unhappy day job in December. This miraculous happening was on Day 4 of her new fully solo year.

I’m not taking credit for any of this, my gorgeous and beautiful clients and colleagues did all the manifesting themselves but you have got to sit up and pay attention and allow yourself to remember how powerful you are.

It is worth remembering too that there isn’t a one who hasn’t put in the graft. It just feels so miraculous when all you’ve dreamed about and asked for and worked towards comes true, doesn’t it?

My own miracles this week (so far) are two lovely new clients for my Club 100, J and S. I knew that there were a couple of newbies in my diary this week but having been a bit swamped leading up to Christmas and then off work for a couple of weeks, most of it below par, I had failed to notice who one of them was.

When I did some research in advance of our call I said out loud to myself “OMG!” J is only the web designer whose work I have been admiring and lusting after for most of the last year, the woman who has done some really beautiful websites for three of my clients – and counting.

I’ve been steeping myself in the miraculous this week, enjoying songs and quotes about miracles and sharing them on my Facebook page.  Here’s a couple of my faves:

“Don’t believe in miracles, depend on them” by Laurence J. Peter

“I am realistic – I expect miracles” by Wayne Dyer 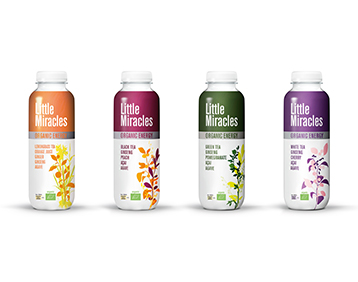 I nipped to Tesco on the corner to buy some lunch in a hurry and came back with a drink I had noticed had all sorts of apparently good things in it, so could very nearly be justified as “healthy”. You know the sort of thing… acai, pomegranate, green tea.

What I didn’t notice was what it was called, until I got it home and twisted off the lid for my first gulp. Yup. You’ve got it. Little Miracles! Yee ha! I don’t care what size those miracles are, just bring ’em on.

Whilst working with a close friend and colleague, swapping thoughts about each other’s intentions for this year, both TUT and The Inner Pilot Light sent spookily-timed emails which spoke directly to our discussions, almost as if they had cosmic CCTV trained on our homes, something I have long suspected.

My pal said to me that she’d used a particular question to guide her in creating her plans for this year and it was this: If I had all the money, time and freedom I wanted, I would…

As luck would have it, I was able to offer this very Q that same day to a client who immediately reeled off a list of no fewer than 11 things she would do, be and have in those idyllic circumstances, the majority of which we were able to weave into a six-month outline business plan for her for the first half of this year.

Alongside my joy and wonder at – and gratitude for – the miracles in the lives and businesses of my little beauties, my own desire is to live a miraculous life myself. So, I’ve got my miracle jar and I’ve written all of my 2015 miracles (which are currently in Divine escrow) on coloured-y bits of paper and popped them inside and now the jar has pride of place on the sunny window ledge just beyond my laptop. I think my jar is even more beautiful than the one I shared with you last week.

Whilst I was doing this, S wrote: “Just wanted to thank you for the Outrageous Openness book recommendation. Only this morning I gave an issue that has bugged me for ages to the “God Box”…90 minutes later an amazing solution appeared in my Facebook feed which was even better than I had hoped for.  LOVE LOVE LOVE”.

I intend using my own miracle jar as a God Box too. It’s where you write down something you appear unable to solve or decide or manifest yourself, and pop it in the box, surrendering the problem to the Divine, or Infinite Spirit. Don’t knock it till you’ve tried it. Look what happened to S!

“If you woke up tomorrow and your biggest problem was gone, how would you know? What would you see differently?”

I hope you’ll write and let me know your answer to that one; all you have to do is hit reply to this email and you’ll appear, like a little virtual miracle, in my inbox in the blink of an eye. I’ve underlined the word see because we must visualise our desired outcomes – in pictures, Love.

You can see what I’ve done, can’t you? I’ve banged everyone I know over the head and dragged them into my reality, a place where miracles happen every day. My Miracles Report for Week One has more miracles in it than you can shake a stick at, more than there have been business days of the week – so far. I wonder what today will bring?

What did the lads say about miracles again? Expect them. Depend on them.

Could you do with a few more miracles in your life and business? Good, as there’s still room for you as one of this year’s Lucky 13, 14 magical months for the price of 10. Let’s talk.

Do you believe in miracles? Oh gosh, I do hope so because they are showing up thick and fast round here. Be careful what you wish for! And remember to use your powers wisely, and for good.

2 Responses to “Miracles Report: Week One”